Recently we had been to Palani. This is my sixth visit to the temple and every time we go, we just visit the Dhandayudhapani hill temple and come back. Thanks to my recent habit of collecting some information about the temple before a visit, this time we had visited a sacred shrine at the hill temple and an ancient temple at the foothill for the first time.

There is a vast Devasathana Lodge very close to the Hill temple with a very good ambiance of large trees, spacious car parking, park like setups, head shaving counter and hotel – all in the same complex. The rooms are also very decent and very cheap as well (Rs 300 in 2015). But unfortunately neither Devasthanam promotes it (no display board at the railway station, bus stand etc.,) nor the rickshaw / auto wallahs let you know about it. They straight take you to a lousy private lodge at a costlier tariff. Please be informed of it.

It is located at the foothill near ‘Saravana Poigai’ sacred temple tank and the main ‘head-shaving’ place. The ‘Saravana Poihai’ is a sort of a big well completely covered and the holy water is being supplied in several bathrooms through pipes. This is an ancient temple, more ancient than the hill temple and among the earliest abodes of Lord Muruga. It is revered as the third Padai-Veedu.

There is one saying that during Sangam period, Kings of Aavi community ruled Palani and its surrounding area, and hence the name Aavinankudi. There is also another version that Boomi Devi(Thiru), Kamadhenu(Aa), Sun(Vi) and Agini, the God of Fire (Enan) once came to this place to worship Lord Murugan and hence the name. To strengthen this view, the idols of Boomi Devi, Kamadhenu, Sun and Agini are present here.

God Muruga holds a Royal Court of all Gods here solving all their problems. The presiding deity is Muruga as a child sitting on a peacock. The sculpture work of the temple and deities are fantastic and in fact more beautiful than the Palani Hill Temple, I should say. The Ganapathy and the Mayil (peacock) vahanas in the prharams are the ‘must-see’ ones.

2) Bhogar Samadhi at the hill temple:

Bhogar is a well known Siddhar who made the idol of Lord Muruga at the hill temple. His guru is Kalanginaathar believed to be a Chinese and his disciple is Pulippani siddhar (whose Samadhi is in Thirupattur near Trichy, covered in my Blog). Bhogar is an expert in Siddha medicines and it is said that as per the last wishes of his guru, Bhogar proceeded to China to spread the knowledge of Siddha sciences. His journey is said to have been made with the aid of an aircraft; he demonstrated the details of the construction of the aircraft to the Chinese and later built a sea-going craft using a steam engine for them. The details of these and other experiments demonstrated by Bhogar in China are clearly documented in the Saptakanda.

Bogar, as an expert in siddha medicine and with the consultation of Agasthiar (Father of Ayurvedic Medicine) and other siddhars, used 4448 rare herbs to make 9 poisonous medicines or Nava Bhashanam (Nava means nine; Bhashanam means poison). Out of this Nava Bhashanam, he then made one Master Medicine that can cure all diseases in a solid stone like form as Lord Murugan which is currently being worshiped as the main deity. Thirumoolar also discusses one such Master Medicine in his book Thirumandhiram. When the abhisheha items like milk and Panchamirtham flows on the deity from top to bottom the medicinal power is extracted in them. After installing, Bogar used to worship the idol and later after him, his disciple took over. Pulippani Siddhar and his descendants maintained this almost as their personal and private temple. Bogar went into Nirvigalpa Samadhi – the highest samadhi stage; where the Mind dissolves with Matter and Energy.

Bogar Samadhi is inside the hill temple, south west of the sanctum sanctorum in a narrow cave like corridor. It is believed that there is an underground passage here that goes straight to the foot of the main deity, Lord Murugan. Actually Bogar himself constructed this and went into Nirvigalpa Samadhi here. He is last seen by his disciples at this entrance.

In the shrine the idol of Bhuvaneswari Amman and a Shiva lingam made of Maragatha stone (when you visit, ask the priest specifically to show them) worshipped by Bogar are present. Below these deities is the underground passage where Bogar went into samadhi. Now this has been covered completely without any indication of such a passage. One of our relatives couple who had been childless for several years had been advised to visit this shrine. They did and got the baby as well. During this trip they had come with the child and sat in the shrine again as thanks-giving

I felt little sad that I am seeing such a sacred and important shrine for the first time out of my six trips. More on Bhogar Samadhi here

Most of the devotees miss these two places like me and the Palani trip is incomplete without visiting these places.

This time, when I climbed the hill, I didn’t feel the tiredness even a little bit and I guess the reasons could be the following:

a) I am into Sri Sri Ravishankar’s Art of Living and had taken up many courses like Basic, Advanced etc., and practicing Yoga and Pranayama for nearly 3 years. I’ve lost weight considerably and at the same time gained more energy. 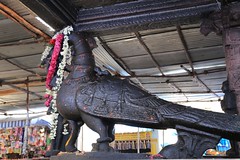 I am not going into more details of the temple since this being a popular temple, there are plenty of internet resources available.

More details on Palani Temple here and here as well.

We took bath at the holy bathing ghat of Shanmuga river at the confluence of Palar River and Porandalar River. The combined river beyond this place is called Shanmukha Nadi and empties into the Amaravathi River. By looking at the photòs, you can imagine the state of such a holy bathing ghat! In spite of so much revenue from the temple, look at the way the bathing ghat is being managed. 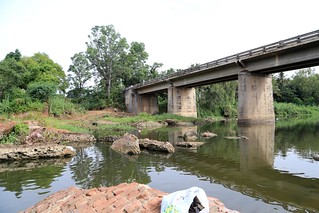 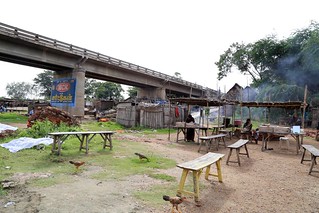 Nevertheless, the moorthies at the temple complex on the bank of the Shanmuga river are amazing. 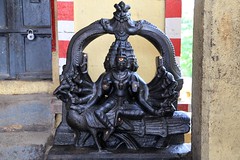 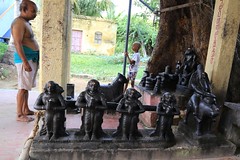 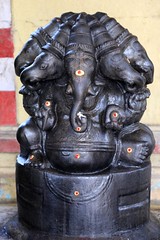 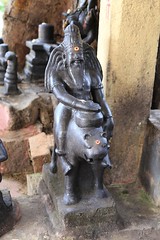 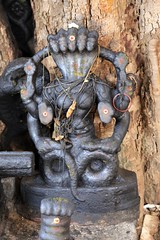 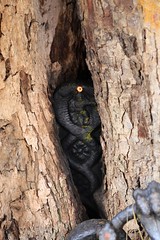 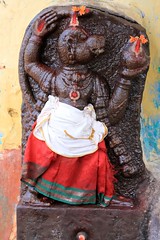 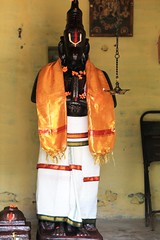 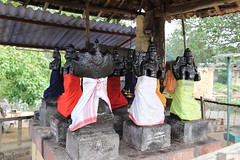 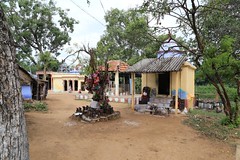 Beautiful view of the Idumbar Hill from the hill climbing path 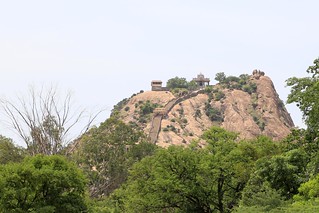 View from the Hilltop: 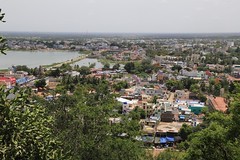 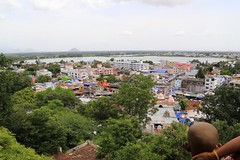 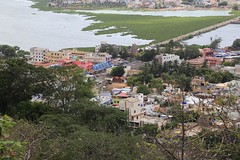 From Thiru avinankudi temple to the hill top footsteps: 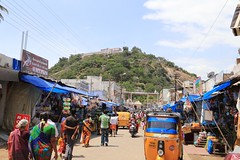 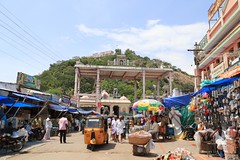