The miniature wonder of Melakkadambur 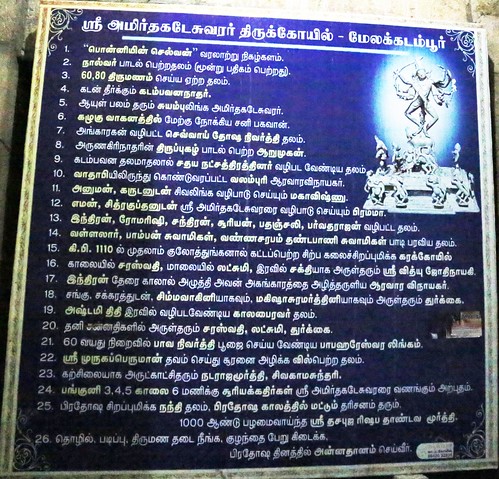 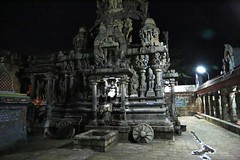 The temple is the archaeological remains of the once magnificent Kadambur Palace of Cholas, where Adithya Karikala Chola was assassinated. The temple and the village are well known in Kalki’s magnum opus Ponniyin Selvan.
Though the origin of the temple goes beyond several yugas, the current stone chariot form of the temple was built by the famous Chola King Kulothunga-I in the year-1113 AD, the king’s 43rd governing year. Before that, it was a brick construction.

Renovation:
The temple was in a dilapidated condition after the invasion of Moguls. In the 1880s, the temple was renovated by Sri Aru.Arunachalam Chettiyar of Devakottai. It was an interesting event that made him renovate this temple. He was travelling in a cart loaded with stones towards the Thirukoodalaiyaturur temple, a thevara padal petras sthalam nearby. He was not only asked to renovate this temple in his dream by the Lord but also got diverted to this temple along with his cart in the night. He took more than 12 years to renovate this temple in a very big way with various mandapams, compound wall and others. Later, Sri.Somasundaram Chettiyar from his family completed it with the Kumbabhishegam in 1920. 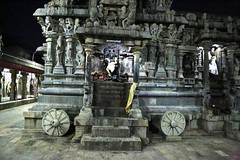 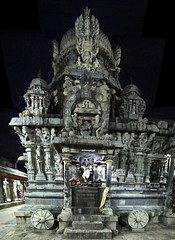 Multi-tier adhisthana:
The manchabhadra upa-pita or pedestal forms the base. The padma banda adhisthana (socle) consists of 18 different distinct moulded tiers (from bottom up); Upana or upatala (the base), Padma (a layer of lotus motif), Jagathi (straight), Kumuda (round), Kanta (neck), Patti and Kapota (layer of lotus petals). This is the prime temple that consists of the maximum no of (18) distinct tiers among the Chola temples. 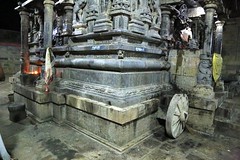 Vimana:
Nagara vimana has kirtimukha kudu on each direction and a round kalasa and stupi. 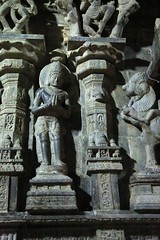 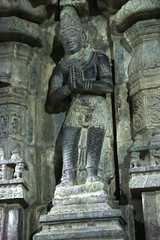 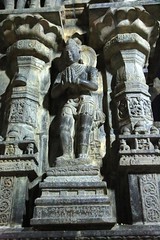 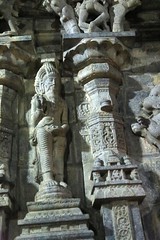 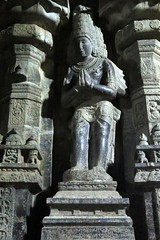 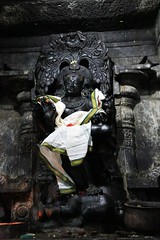 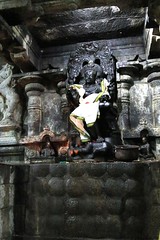 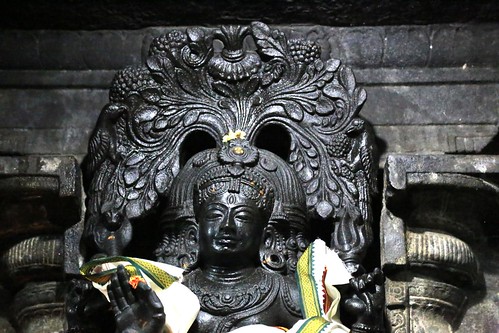 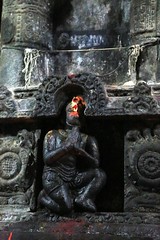 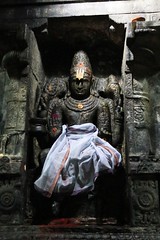 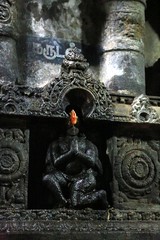 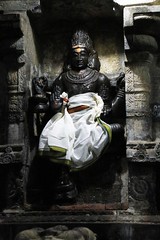 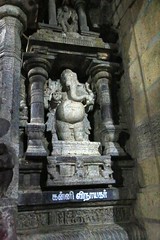 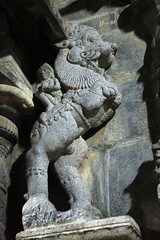 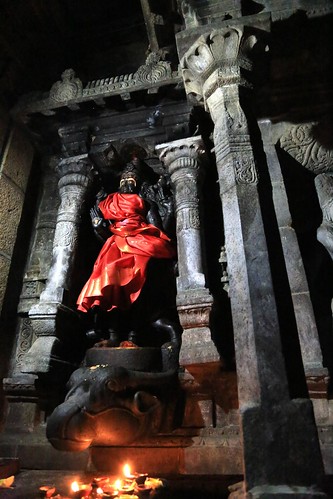 The invaluable treasure of this temple is a bronze procession deity called Dasa Bhuja Rishaba Thandavamoorthy which will be taken out once a fortnight only during the Pradhosha days between 4:30 and 6 PM. Due to security reasons, the deity will not be available for dharshan beyond this timing.
It is said that the deity belongs to the Pala dynasty of Bengal and was brought by the victorious King Rajendra Chola I after the Bengal war but it is also said that it is the personally worshipped deity of Srikanda Sivan from Bengal, the Rajaguru of Klothunga Chola I, who supervised the construction of this temple. He left the moorthy here when he returned back to Bengal after the completion of the temple construction.
The moorthy is small in size and depicts Lord Shiva dancing on His bull vehicle with all ten arms spread and holding weapons. In the peeta-stage below are Mother Parvathi, Lord Vishnu, Bhairava, Veerabadra, Lord Vinayaka, Maharishis Narada, Brungi and Mruganda, Nandhi Deva, Gandharvas – a group in the celestial world known for musical skills and Boodhaganas. 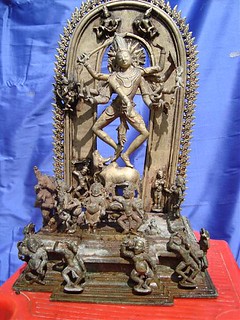 Sun and Moon Worship:
The rays of Sun fall on the Lord on 3rd, 4th and 5th day of Panguni-March-April during morning for about 15 minutes. It is said that the rays of moon also falls on the Lord from the front entrance during Purattasi / Aippasi but can not be confirmed.  Even if it falls, it is said to be very feeble 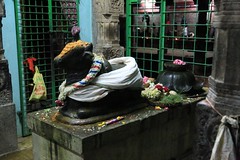 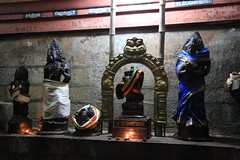 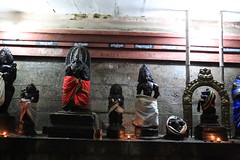 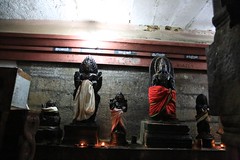 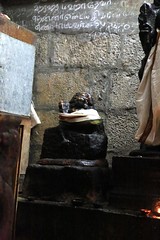 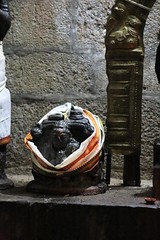 Festivals are being celebrated every month in a grand scale.

This temple was part of our 3 days temples trip in and around Chidambaram. We wanted to have the dharshan of Dasabhuja Rishaba Thandava moorthy which is available only on the Pradhosha days and so planned our trip accordingly along with the visits to the nearby Thevara paadal petra sthalams – Omampuliyur and Kanaattampuliyur. Since the other two are far off places, we first went to Kanaattampuliyur early enough, before the temple opens at 4 PM. We had the dharshan and witnessed the pradhosha pooja arrangements. We then came to Omampuliyur and had the pradhosha dharshan there. We finally arrived at Mela Kadambur by around 6:30 PM. As we entered the Maha mandapam, the archagar was coming towards us carrying the Rishaba Thandava moorthy in both his hands. I thought they were going to keep the moorthy somewhere for the worship but only later I realized it was being carried inside to the locker! A one-two minutes delay would have meant that we missed the dharshan and got disappointed. In the same way, the archagar called us inside to have the dharshan of Lord Amirthagadeswarar in silver covering. There also, the silver covering of the Lord was about to be removed and taken to the locker. Since the location is very remote, due to security reasons, the temple authorities are very strict in their timings and so make sure you be there before 5 PM, when you plan a visit. We were elated with the grace and kindness of the Lord for having brought us here “just in time”.

We also met Sri.Kadambur Vijay, the trustee of the temple, who was kind enough to take us around the temple and explain each and every minute sculptures in the goshta walls, in spite of his busy responsibility with the temple and locker closure procedures. 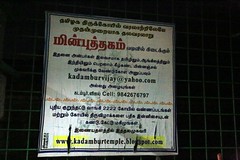